In 1959, his work as a disciple was visible and real: the first fraternal centers were established.

The first books were published starting in 1946. 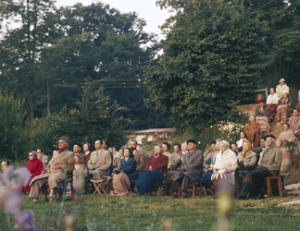 Brother Mikhael and the Brotherhood in Izgrev 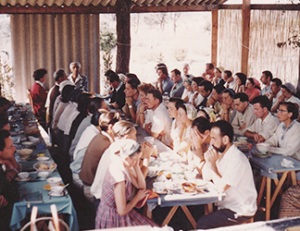 Brother Mikhaël and the Brotherhood at Bonfin

In February 1959, Brother Mikhaël leaves for an important spiritual journey in India.

According to the stories he told in Izgrev after his return – spontaneous, informal talks in which he revealed just a few elements of his itinerary – he first spent several months in a retreat in the Himalayas, meditating in silence. Almora, Srinagar, Gulmarg, Naïnital… Then, as he had hoped, he made some sacred encounters that were extremely important for him, confirming the value of his work and his mission. He kept his testimonies very low-key. It was around this period that he received his initiatic name “Omraam”.

He explained in this regard:

“Om, these are vibrations that disintegrate all that is negative, evil. It solves. You know that in initiatic science, initiates studied how to dissolve and coagulate things. Solve sends things back to their source, spiritualizes them by making them like light. Raam has the vibrations, the power to condense divine things, to make them palpable: it coagulates. So the two principles of esoteric science are hidden in this name. “(March 6, 1960)

Louise Marie Frenette, The Life of a Master in the West (2002), Robert Lachance (Laval), ed.

Afterwards, he travelled throughout India, visiting “major cities, villages, places of pilgrimage and worship, sacred caves, palaces and temples. “He met all the different social classes of the population, spoke with religious people, academic persons, businessmen, lawyers, scientists… He visited many ashrams, such as that of Ramakrishna and that of Ramana Maharshi; he was welcomed by many masters, some of whom were already known in Europe: Ma Ananda Moyi, Shivananda, Nityananda Maharaj, who greeted him with words of praise. He felt a deep affinity with the sadhus who are truly inspired, welcoming, simple, kind and whose disciples are radiant and helpful.

Upon his return to France in February 1960, his disciples, impressed by his physical change, his authority, his luminous presence, begged him to accept to be called Master from then on. He chose his new name “Omraam Mikhaël Aïvanhov”, the official name under which all his lectures will be published.

OMRAAM: it is a sacred, initiatic name: om represents that which dissolves, raam that which condenses.

You can find excerpts of lectures on the fbuOMA channel on Youtube.