Shortly after the Liberation, the fraternal group found a dilapidated house in Sèvres on an abandoned garden, bought it and worked to restore it. At the end of December 1947, the association “Fraternité Blanche Universelle” is created. Its declaration is registered in the Official Newspaper of January 16, 1948. 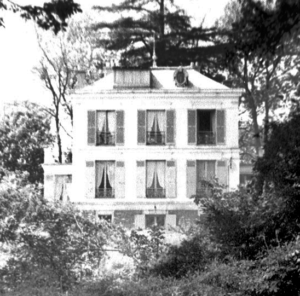 Driven by the never-ending desire to prove that a fraternal life is possible, Brother Michaël gave the impulse to create the French Universal White Brotherhood on the model of Peter Deunov’s White Brotherhood. He gave the property the same name as the fraternal center of Sofia: Izgrev (sunrise) 4.

To the name White Brotherhood (which means Brotherhood for the good, for the light) he adds “universal”, to translate a very wide opening of heart and soul to all humans without exception and to all luminous spirits. When Peter Deunov spoke of the ” Great Universal Brotherhood “, he was referring to the great spirits of light who are the source of spiritual currents and thus influence the evolution of humanity. His disciple Michael wanted to add to the idea of universality a dimension of realization on earth, which will always distinguish his thinking.

In the meantime, as soon as the war ended, in 1945 and 1946, Brother Michael was invited to Switzerland in the canton of Vaud to give lectures.

In several towns he establishes the foundations of fraternal groups, which will form and grow at the same time as the French association 5.

In Sèvres, however, between 1947 and 1950, the Brotherhood and the friends around it went through a period of great tension. Brother Michaël had to face various attacks and attempts to retrieve from outside. Despite his absolute integrity, a moral trial was set up against him out of nothing. Five days after the official establishment of the association, on January 21, 1948, he was arrested; he was brought to court and sentenced in the first instance to four years in prison. At the same time, a long campaign of defamation took place in the press. In March 1950, the Paris Court of Appeal will reduce the sentence to thirty months. The Brotherhood, which had been severely tested from the very beginning, emerged from this period even stronger and more resolute.

Subsequently, concerning the 1950 sentence, the prosecution chamber of the Court of Appeal of Aix-en-Provence ordered the rehabilitation of Michaël Ivanoff on September 28, 1960.