For a quarter of a century, he continues to live a daily life consecrated to Heaven and to his “brothers and sisters”, travelling and sharing his presence among the fraternal groups whose creation he inspired, in France, Switzerland, Canada, and shortly after in other countries of Europe, Africa, America… 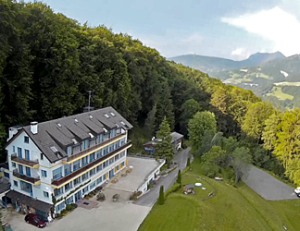 The center of Vidélinata in Switzerland

The center of Blagoslovénié in Canada

Every day he gives lectures. He watches over his disciples, seeking their progressive liberation. He also has private appointments with many people, sometimes celebrities, who ask him for advice. Attentive to each human being personally, he dedicates his time generously to help them solve their personal or relational problems.

Practically every day since 1938, he gives what he calls improvised “little talks” in French, always free of charge. These lectures, vivid and spontaneous, are taken in shorthand by Sister Stella during the first decades, then starting in the 1960s recorded on audio tapes, and later in 1979 recorded on video. They are estimated to be about five thousand and are still being published by Éditions Prosveta.

Deliberately simple and accessible to all, his lectures enlighten with profound wisdom the great universal moral laws, they link to their common source the various sacred traditions of humanity.

In certain years a theme is privileged, such as taking and giving – the double nature of the human being – the sun, symbol of the divine – “Know thyself” – the sublimation of love – nutrition, etc…

Between 1965 and 1985, Omraam Mikhaël Aïvanhov travels many times, invited to all the countries where Universal White Fraternity associations were formed. He meets many people, perfects his English and gives several series of lectures in this language.

He never wrote any books himself: he left it up to his disciples to transcribe his teaching. Several collections of his works have thus been published on paper, as well as on audio-visual supports, magnetic tapes, cassettes, CDs, DVDs, e-books…

Since Master Omraam left this Earth on December 25, 1986, it is the association French Universal White Brotherhood which holds the moral right on the whole of his work, by will dated September 21, 1986 in Fréjus.

Seventy years after its official establishment in France, the Universal White Brotherhood is present in nearly thirty countries.

Its teaching covers a universal dimension, and the methods it gives are becoming more and more relevant to the changing mentalities and the problems posed by everyday life. The Master’s constant concern has always been, as he said himself, to be useful to his fellows, to help them to find in themselves the forces placed in them by the Creator, and to participate in the realization of a truly brotherly worldwide family, a golden age for humanity.

A Spiritual Master is a teacher who gives you keys to understand the meaning of existence and to cope with the situations that arise in life. His only concern is to help and enlighten his disciples so that they can overcome their difficulties, thrive and live a life that is beautiful and meaningful.

He is a living example. His actions are in accordance with his words. There is no contradiction between what he teaches and what he does. He is a being filled with wisdom and love.

Many books, testimonies and stories exist on the life of Omraam Mikhaël Aïvanhov. They will allow readers to discover who he is and to learn more about him and his teachings.

For a disciple, to meet his Master means to find a mother who agrees to carry him for nine months in her womb before giving him birth to the spiritual world.

And once he is born, i.e. awake, his eyes discover the beauty of creation, his ears hear the divine voice, his mouth tastes heavenly food, his feet carry him to different places in space to do good, and his hands learn to create in the subtle world of the soul.

You don’t get to be a saint or a prophet in one lifetime. You must have incarnated many times on earth and have worked, worked, worked… because on earth, mistakes, errors, falls are often made. Now how could a spiritual Master help human beings and instruct them if in other incarnations he had not had to go through the same experiences, overcome the same obstacles? What merit would he have if he had not made the same mistakes and gone through the same trials before finally getting to be what he is? He would never dare to stand in front of others and ask them to make the efforts that he himself had never made. If we can follow the advice of the Initiates and of the great Masters, it is because they know the path, they know the pitfalls of the path, and they also know how to overcome them.

After reading a few esoteric books, there are people who believe they are capable of playing the role of spiritual Master. And the others, who are naive, instead of studying them a little to see how they really behave, go and follow them with closed eyes! They don’t ask themselves where that person comes from, how they lived until then, who was their Master, who sent them… Oh no, no, it’s not worth thinking about it: it’s enough if someone puts on an act and tells them that within three days they can be initiated – for a large sum of money, of course – and they believe it. They are in a hurry, you understand, the Initiation should not last more than three days, and therefore, the first charlatan or crook who wants to take advantage of their gullibility is welcome: he will give them the Initiation! Well, since their eyes were closed, since they were so anxious to be deceived, then they should not complain.

A true Master shows the way to God

You cannot ask of a spiritual Master that he has all the knowledge and all the powers. You have the right to only ask one thing of him: that he may be for you a link to Heaven, that he may show you the way to God, that he may guide you on the path of light. Moreover, a true spiritual Master will not keep you for himself, he will lead you to God. And if you insist on staying with him, he will tell you: – No, no, don’t count so much on me, I cannot give you everything, only the Lord can fulfill you. I can only help you to find the way. If you want, I am, like a telephone booth that allows you to communicate with the divine world, with the celestial hierarchies, that is all.

That is what a true Master will say. Now, of course, if he is not a true master, he will tell you all sorts of other things, and so it is up to you to have some judgment.

What reward for the wise?

Whatever happens, never forget that all human beings are your brothers and sisters, look for ways to help them and show them your love without expecting anything in return. Because in reality you already are rewarded: that inner expansion, that warmth that fills you when you love. This is a great reward, there is no greater reward in life. Then your heart is like a river, a source of living water.

Humans are always waiting to be rewarded for the good they have done. But he who has understood the secret of love doesn’t wait, he doesn’t even think that you should give him something in return, because he already tastes a happiness that is beyond imagination. As he lacks nothing, he expects nothing: he swims in joy, he radiates, and so he gains the trust of many friends. Where will you find a greater reward than this?

What is a Spiritual Master? It is a being who has managed to control, to dominate his thoughts, feelings and actions… That’ s all. To dominate one’s thoughts, feelings and actions implies certain methods, a special discipline and a profound knowledge of the structure of the human being, the forces that circulate within him, the correspondences that exist between his whole being (his organs, his different bodies) and the different domains of nature. To be master of oneself also supposes that one knows the entities of the invisible world and the structure of the entire universe .

A Master is a being who has solved the essential problems of life, he is free, he has a strong will, but above all he is filled with love, kindness, gentleness and light. To become a Master, so much work, study and perseverance are necessary!

… True Masters are powerful because they have managed to match their philosophy and behavior. What they teach, they are the first to put it in practice in their personal life. They are living examples. And to be a living example means to be like a spring, as I have already told you, a spring that will attract plants, animals and men.

… This science and self-discipline that he has acquired must only serve to manifest all the qualities and virtues of selfless love.

Thus, what characterizes a true Master is not his science, his clairvoyance or his powers, but his selflessness. He may have the science, the clairvoyance, the powers, but if he is not selfless, even if humans may see in him a Master, Heaven does not recognize him as such.

The positive look of a Master

Often, when I speak to you, I feel that something in you is rebelling, you think: “He only speaks to us about the soul and the spirit, about the high ideal, about the divine life… but he does not see the difficult conditions in which we live? “. Yes, I do see it, I see it everywhere. But I also see other things: I see all the good conditions which are there and which you don’t see, because you allow yourself to be preoccupied with your difficulties.

And what I see above all are the good conditions that you have within you, treasures, a tremendous wealth, while you only see the exterior situation, the inconveniences of daily life. The day you understand me, you will feel stronger, richer. Yes, you always need someone who encourages you, who can open your eyes. You only see your weaknesses, your poverty, when there are so many other things to see and I am there to show them to you

A school of freedom

True freedom of the human being lies in the power that God has given him to find everything within him. This is what a spiritual Master wants to convince his disciples of.

How wrong can they be, when they think of a Master as a despot who is only concerned with imposing his power and his convictions on others! In reality, he has no desire to impose anything on anyone. Or rather, if he has only one conviction he wants to impose on them, it is that their salvation lies exclusively within them. And he shows them the methods, the experiences to make, and leads them by example. Once they are instructed and enlightened, it is up to them to start working. Once the way is opened to them, once they have the methods and the example of their Master, they must rely only on themselves.